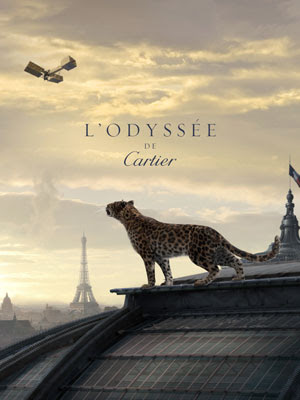 TOP EXCLUSIVE! Passion4Luxury readers are now able to view “L’Odyssée de Cartier” before it is presented on Cartier’s Facebook page tomorrow morning, Paris time.
Cartier will reveal today a preview of its upcoming film “The Cartier Odyssey”, with the ambitious short to feature three panthers and a host of fantasy scenes.
In honor of Cartier’s 165th anniversary, the panther will take viewers on a journey through Cartier’s iconic designs during the three-and-a-half-minute spectacular.
“The Cartier Odyssey” (L’Odyssée de Cartier) marks the label’s most ambitious advertising project for over a decade.
Directed by Bruno Aveillan, the film will debut March 4 on television screens across the US, France, China, Russia, the UK, Hong Kong and the Middle East.
Through this film, Cartier offers a unique moment of escape, inspired by the desire to enchant, to share its passion and to communicate its values.
You will have the opportunity to discover the first screening of this film via an exclusive screening on March 2 on Cartier’s Facebook page .
Watch the Cartier clip in Exclusivity on P4L
The story of Cartier, from its birth in 1847 to European royalty to its modern-day status as a luxury jewelry house, is quite a long one—165 years, to be exact. But the famed jeweler (with the help of a 60-person crew and a three-month production time span) has managed to wrap its unique history into just three and a half minutes in its new short film, L’Odyssée de Cartier.
“There are so many wonderful Cartier stories—from the first Santos watch created in 1904 to the iconic Love bracelet—we wanted to share these stories with our clients and everyone who may not be as familiar with our 165 years of history,” Cartier North America president and CEO Emmanuel Perrin tells P4L of the video, which the label unveiled last night in New York at a private press screening. “L’Odyssée de Cartier weaves together these stories in a unique and powerful way through the eyes of our iconic Panthère.”
The film reveals a glimpse into an imaginary world inhabited by Cartier’s designs, under the watchful gaze of the panther. The backstory on the film’s animal muse? “The panther has been the ultimate emblem of Cartier’s jewelry expertise since the 1930’s, thanks to Jeanne Toussaint, Cartier’s creative director during this period. Her expert eye and consummate elegance are the hallmark of Cartier style. Jeanne Toussaint’s nickname was La Panthère, Lady Panther,” explains Perrin.
While the panther (pictured, below) may be the showstopper of the film, many of Cartier’s most enduring designs (including the Love bracelet, the Trinity de Cartier collection, and the snake necklace commissioned by María Félix) also make an appearance, along with supermodel Shalom Harlow (pictured, below), who portrays the Lady in the Mansion. (”Shalom Harlow embodies the spirit of the Cartier woman—elegant and passionate, like Jeanne Toussaint herself,” Perrin explains of the model.) The film, directed by Bruno Aveillan, debuts March 4 during primetime television in the U.S., but P4L has still images from the film, here. Though the short is centered on Cartier’s past, don’t think they aren’t already focused on the brand’s future—Cartier is set to launch a new collection, Juste un Clou, in April, followed by the release of a new Tank watch in June. 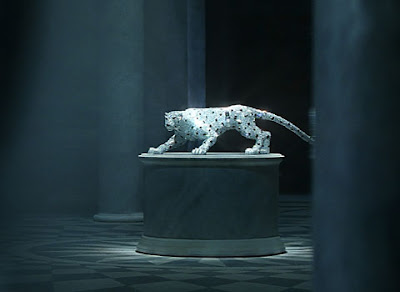