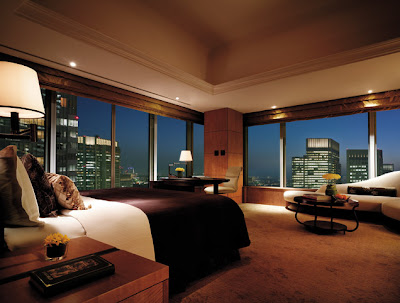 Shangri-La Hotel Tokyo
Tripadvisor, the world's largest review portal release this week the winners of its TRAVELERS' CHOICE AWARDS 2012 as voted by its contributors. Surprisingly, the Top 10 Worldwide Best Luxury Hotels only include three luxury hotel chains, Shangri-La, whose Tokyo property holds the top spot, Ritz Carlton (Osaka at no 7) and St Regis (Bali resort at no.10). Opened less than 2 years ago, Shangri-La Tokyo has managed to beat established players and was voted number one of all luxury hotels in Asia. In Europe, the Imperial Vienna ranks no 1 among the top 25 luxury hotels, while Ritz Carlton's Al Bustan Palace in Muscat holds the top spot in the Middle East. To the detriment of established travel print magazines, Tripadvisor has become a critical influential rating platform for hotels worldwide, most hotel chains recognizing its importance by placing direct review links on their websites for each property. Accor's SOFITEL and FOUR SEASONS are among the luxury chains which feature Tripadvisor reviews on the webpage of all their properties worldwide.
﻿
4:40 PM
Unknown
Awards, luxury hotels, TripAdvisor