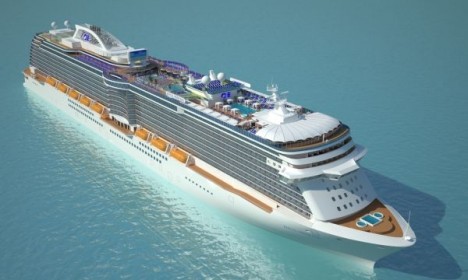 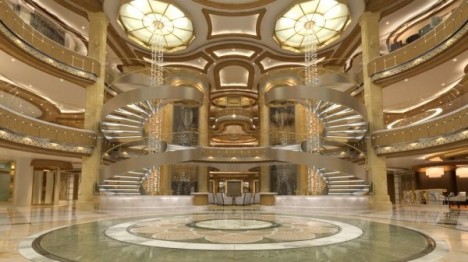 Royal Princess  - Atrium
PrincessCruises has revealed further details on its new vessel Royal Princess, set to launch next year.
The Royal Princess weighs in at 141,000 tons and can carry 3,600 passengers, making her slightly bigger than last year’s major debuts, the Disney Dream, Carnival Magic and Celebrity Silhouette.
Princess has revealed more details about the atrium it plans for the Royal Princess, which will be 50% larger than the atriums on other recent Princess ships.
As well as featuring existing outlets present on current Princess ships, the plans will see the addition of a new ice cream outlet and a luxury gift shop, targeted at those celebrating major events such as birthdays and weddings on board.
A new cocktail bar called Bellini’s will also debut, along with a seafood bar selling sushi, sashimi, ceviche and caviar.

In a preview video (below), the atrium is shown as a ‘street-cafe’-style open space, with glass staircases, backlit floors and venues that appear to float in mid-air, a new design style which the line describes as an ‘evolution’ of its current atriums.
On the top deck, there will be a new adults-only pool and other new pools which surround a tropical “island” that offers sunbathing by day and an outdoor nightclub in the evenings.
The first preview cruise will depart in June and the Maiden Voyage will see the Royal Princess tour the Mediterranean, Princess confirmed.
Princess Cruises' President and CEO, Alan Buckelew, and Executive Vice President of Fleet Operations, Rai Caluori, take you on a virtual tour of the new Royal Princess Atrium.
Coming in June of 2013
﻿
2:35 PM
Unknown
cruise, luxury cruise, Princess Cruises, royal princess