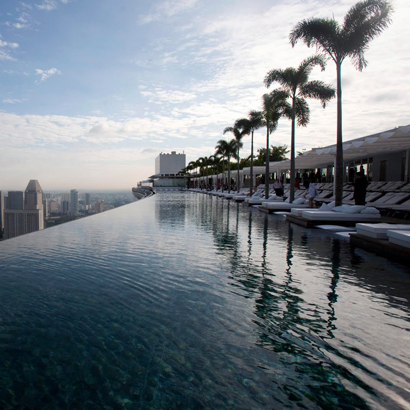 Marina Bay Sands - Singapore
Architect Moshe Safdie’s multibillion-dollar resort and casino is the very definition of balls-out: 55 stories crowned by a 500-foot rooftop pool, which is set amid 250 tree species and several hundred different plants in a blooming oasis called the Sands SkyPark. Three-times Olympic size and cantilevered so that the water seems to drop straight over the sides of the hotel, this claims to be the biggest rooftop pool in the world, and it’s for guests of Marina Bay Sands only. Forget about views to distant monuments; from the nearby observation deck (which is open to the public), you’ll be amazed just looking down at lower reaches of the monumental hotel itself. 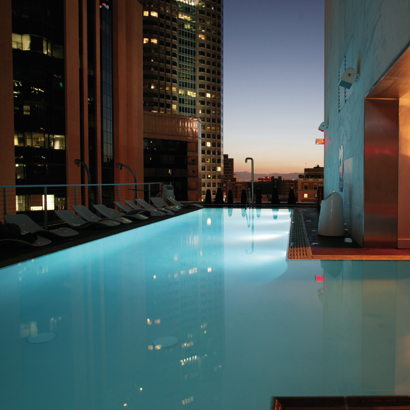 360 views of Los Angeles' reenergized downtown are enhanced by the pool topping André Balazs’ flirty revamp of the old Superior Oil headquarters. Imagine vibrating cherry-hued water beds and yellow 1960s Panton chairs, Astroturf underfoot and a nightly DJ reigning over the next-door dance floor. If you’re in the mood for cozy, order a drink from waitresses dressed as cheerleaders and sit around the outdoor fireplace. The party’s on until 1:30 a.m., after which you can satisfy late-night cravings at the hotel’s 24-hour outdoor patio restaurant, next to a flaming water fountain. 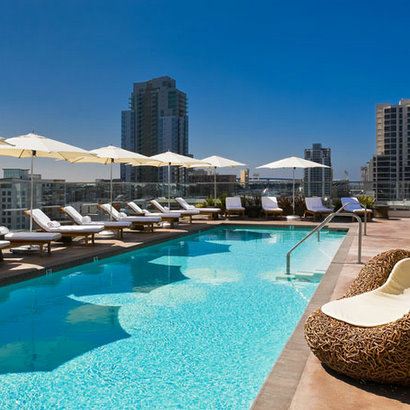 Some pools we like purely for their design, others because, well, Prince Harry of Wales does, too. He’s one of the VIPs spotted recently at Andaz San Diego’s pool, where there’s a continually throbbing DJ beat, VIP bottle service, cushioned lounge beds, and endless babe-spotting. We figure if the Prince judged this a worthy pool, it must be -- God know he likes to party. Andaz is pretty much even in rep with another well-known pool party spot, FLOAT, atop the Hard Rock Hotel, whose patrons include Brody Jenner and Kim Kardashian. The Joule, Dallas
There’s plenty to soak in from this cantilevered marvel on the 10th floor of Dallas’ smartest boutique hotel. The Joule juts eight feet beyond the hotel roof, so you’re literally swimming above the commuter rush of the downtown core, hemmed in glass. Hungry? Charlie Palmer at The Joule serves up a lighter poolside menu for swimmers. And poolside service includes an imaginative custom cocktail list as well. 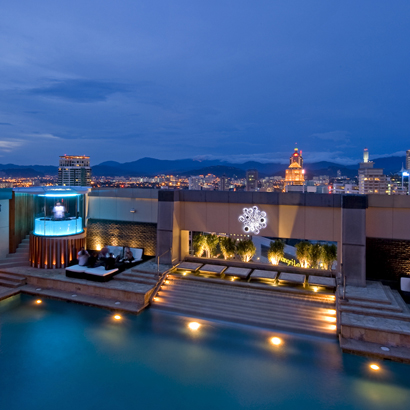 Luna Bar is a covered bar extending the length of the hotel’s rooftop pool. Views are of the Kuala Lumpur skyline, including the 88-story Petronas Twin Towers, and the bar, which offers al fresco dining as well, is a fixture of Kuala Lumpur nightlife and three-time winner of Hospitality Asia Platinum Awards’ “Best Night Spot Award.” The pool is a more exclusive, private venue that’s only open to hotel guests. 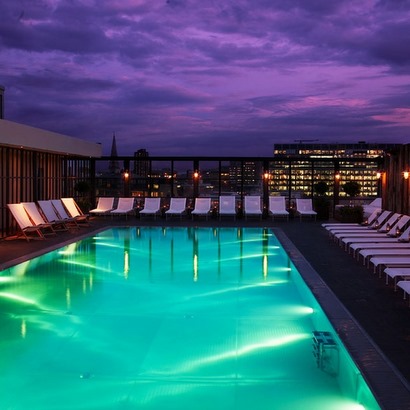 The definition of true privacy is a pool for members only, and this one sits on the roof of a converted warehouse that’s now a private members club in East London serving A-listers from media and fashion industries. Founder Nick Jones has nine “houses” in Berlin, London and U.S. cities, including New York City’s Soho House. Shoreditch House’s pool shares the roof with a bar-lounge complete with cozy open fire and a lawn-garden area for relaxing barefoot. Next door, a pub has been converted to offer 26 rooms for club members (you can even borrow “dress-up accessories” from the concierge) 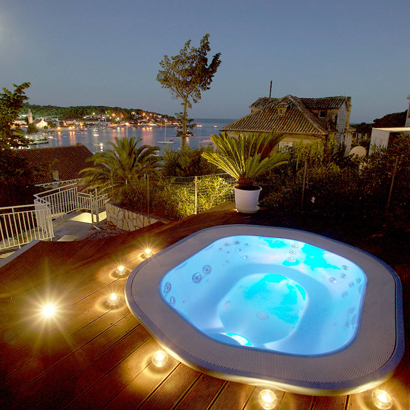 A neon-lit bar runs the length of The Top, this Croatian Dalmatian islands hotspot within a stylish contemporary boutique hotel facing the sea. It takes a ferry or speedboat from Split Kaštela/Resnik Airport to get to Hvar, but once ensconced on Hotel Adriana’s roof, you’ll spend hours swimming in a year-round seawater pool, taking in views of the Venetian piazza, cathedral and harbor they call "the next St. Tropez." 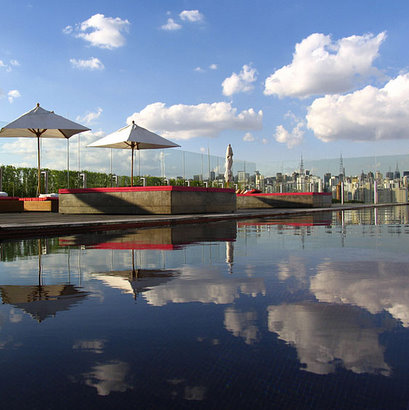 This sexy, curvy hotel shaped like a boat (huh?) was designed by architect Ruy Ohtake, with interiors by João Armentano, and it’s a veritable objet d’art that lives up to its name. The oversize pool with an underwater sound system runs the length of the roof and is illuminated in crimson at night. And right beside is Skye bar and restaurant, serving up a multi-ethnic menu with views of Ibirapuera Park within the upscale Jardim neighborhood. 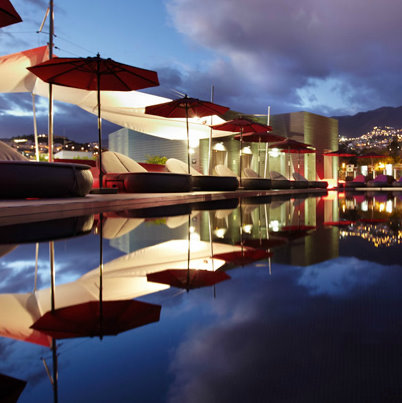 An infinity-edge pool and -- surprise! -- 20-meter Jacuzzi, together with a scenic solarium bar-lounge, rank this among the world’s exceptional hotel rooftops. Gaze at cruise-ship-filled Funchal Bay and mountains surrounding Madeira’s capital, Funchal, as a spa specialist begins your vinotherapy session in one of the poolside cabanas. Spend happy hour at Bar 360° before an evening in the historic quarter, steps from the hotel. Or stay put for a locally sourced meal at its Alsace-inspired UVA restaurant, led by Antoine Westermann, whose restaurants have earned a total of three Michelin stars. 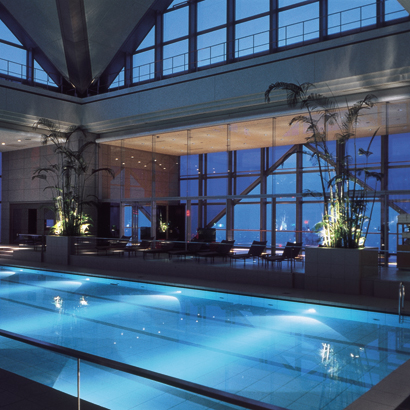 Bill Murray fans will remember this pool well. It’s the 20-meter stunner with floor-to-ceiling windows and a glass-topped roof that, in Lost in Translation, Murray swims attempting to court Scarlett Johansson in her breakout role as Charlotte. So to recap: Shinjuku district and Mount Fuji views from the 47th floor, and the bonus of swimming in a movie set for a bodacious Hollywood star.
7:15 PM
Unknown
Rooftop Pools