a) The way the public buildings came about

Senior architect (1953-70), and then Chief Architect of CPWD(1970-4), Rahman was responsible for many of the buildings that give central Delhi it’s present character; the post and telegraph building (1954),the auditor and general  controller’s office, the Indraprastha Bhavan, the WHO building (1962) and the multi storey flats at RK Puram (1964) and the Patel Bhavan (1972-73).

Horizontal bands of large glass windows, freestanding staircases and cantilevered porches were the main features. Plinths became lower, living and dining rooms were combined and, in houses for the wealthy, bathrooms became attached to bedrooms. Windows in many houses began to be recessed and concrete fins began to appear on the facades. The massing became horizontal. Reinforced concrete became the material of the modern era not only for houses but even more for public buildings. 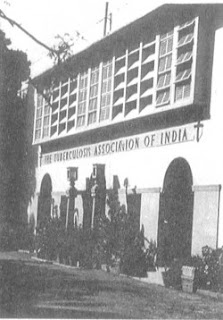 Walter Sykes George (1881-1962) was an English architect in the post Independence era. (He had designed the St Stephens College,built in 1941). George's design for the Tuberculosis Association Building in New Delhi shows a modification of the prevalent International styles. The building’s adjustable lightweight horizontal louvers place it clearly in a contemporary Modernist context. George's use of materials in the building does, however, show continuity with much Anglo-Indian architecture of the 1930's.

The central and state pwds and their offshoots such as the DDA (estab provisionally in 1955 and finally in 1957 when it absorbed the Delhi Improvement trust) continued to work much as before Independence. They were primarily involved in the design of public buildings and large-scale housing developments. The design efforts of the architects of the CPWD in New Delhi have made a major impression on the city.

Many of the buildings such as Vayu Bhavan, Krishi Bhavan, Udyog Bhavan, Rail Bhavan(below,left),Vigyan Bhavan(below,right) and the Supreme court (1952) use chattris and chajja's, and are topped by domes to give an Indian character. The plain cubical mass of a government conference hall, the Vigyan Bhawan, which was designed by RI Geholote of the CPWD for large international conferences, uses elements from Buddhist, Hindu and Mughal architecture. The large entrance is of black marble and glass and is shaped in the form of a chaitya arch of the Ajanta style, symbolizing”the Indian heritage of peace and culture."  The arch motif became an easily recognized and frequently employed symbol of Indian identity, applicable to a wide variety of structures. 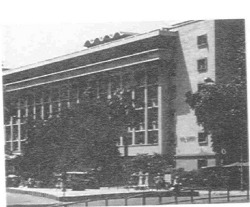 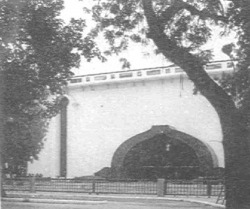 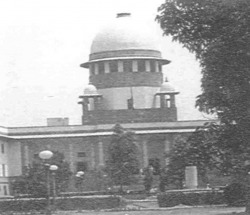 The Supreme Court was designed by Deolalikar in an Indo British architectural style as it is located in Lutyen's complex. It is regarded as rather heavy headed.For example the chattris have square 15 by  15-inch columnar supports which stand in strong contrast to the elegance of those at Fatehpur Sikri or in Lutyens or Baker's work.
Towards the next decade-the sixties
The sixties brought about the presence of Joseph Allen Stein onto the architectural scene of Delhi. His work of the period - the India international centre (1959-62) and the AmericanInternationalSchool (1962-68)- comes more out of the American Empiricist tradition than the European Rationalist and its concern for orthogonal geometry particularly in the sitting of buildings.
His later work in the Ford Foundation building (1969) and Triveni Kala Sangamand the UNICEF building (1981) shows a continuous intellectual development. Few other architects have retained so independent and consistent a line of thought. Despite such works, it was the work of Gropius and the international style that overwhelmingly influenced the younger architects of the period.
It is possible to tentatively distinguish between those architects who consciously or unconsciously followed in 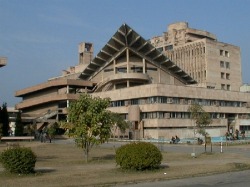 The Indian Institute of Technology (above left) campus (1961) designed by Jugal Kishore Choudhary and the JawaharlalNehruUniversity (above right) campus by the CPWD and Mr CP Kukreja show influence of Rationalist thinking. The IIT Delhi is a less direct image of Le Corbusier's work than the PunjabUniversity plan. It consists of the academic buildings, housings and research facilities and faculty and staff residences. The former consists of three storey parallel blocks and a seven-storey block perpendicular to the longest of the three storey locks, which it joins to the administration. The buildings are linked by covered ways, which form courtyards-, a marriage of Oxbridge and Le Corbusian patterns.

The use of concrete for the main blocks contrasts with the rough stone aggregate of the lecture theatres and the multi story staircases provide sculptural elements penetrating the courtyards. 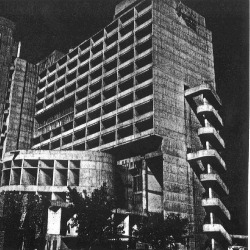 The Akbar hotel (1965) designed for the Delhi Municipal Committee owes a lot to the Unit'ed' habitation by Le Corbusier. This building, which formed part of a new commercial center built in south Delhi in the 1970s, echoed many of the qualities of the Chandigarh secretariat in its use of concrete and its sculptural surface pattern.

It is a thirteen-strorey concrete slab building, which forms part of a larger commercial complex. A service floor separates the bedrooms above from the common areas on the lower floors. Like the Unite, the roof has "communal facilities"- in this case, a restaurant, garden and small open air theatre. A two storey curvilinear block juts out at the base, echoing the form of the MillownersBuilding in Ahmedabad. It houses restaurants and lounges 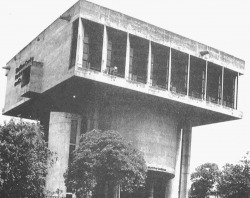 Prasad's other work, which clearly picks up on Le Corbusier's thought processed is the Shri Ram centre of a private trust promoting dance, drama and music. Like much of Prasad's works of the period, it is built of reinforced concrete and expresses, through architectural form, the variety of functions the building is to house. For instance, the theatre is in a cylindrical form and the rehearsal spaces are in the form of a rectangular mass. Many of the spaces have to serve a multiplicity of purposes and hence are open ended in design; there has also been a major effort to have the interior and outdoor spaces linked together.

The work in India that followed the Empiricist approach originally owed a great a debt to Richard Neutra and Frank Lloyd Wright; it was more thoughtful in dealing with the local contexts. Later the influence was continued through the works of Louis Kahn. Stein and Mansigh Rana (Jawaharlal Nehru Memorial Library) (1968) .

Architecture in India has had a long engineering tradition and structural engineers such as Mahendra Raj and H.K. Sen are amongst those whose collaborative work with architects created many innovative buildings. Raj's works include the Delhi cloth Mill (1970), the Permanent Exhibition complex (Pragati Maidan-1972) and the National Co-operative Development Corporation building.

The period since the 1960's has been an era in which issues of cultural identity have also been raised, not only in India, but also in countries, such as France, which felt culturally threatened by changes taking place in and around them. Perhaps the fundamental problem with the Modern movement was that architects used the forms of buildings and urban designs as a symbol of progress and democracy rather than attempting to deal with the broader array of human needs.

The geometric patterns of Modernism became used as a set of types for all architectural works by a number of architects. The patterns of these buildings became embedded in the minds of the clients as expressions of progress. Much of the continuing Modernist work consists of commercial buildings, some of which stand out because of their distinctive character. This character may arise from their location-they are single towers in an otherwise lower scaled built environment or they have a design different from the norm.

The former group includes such buildings as the Vikas Minar of the DDA and the latter is exemplified by buildings like the LIC (below,left) by Charles Correa in CP. It is a stone and mirror glass building under a steel framed parasol set on a podium and dwarfs the Connaught circus buildings(below, right)  designed by Tor Russell.Both the buildings are substantially different from their surroundings as well as from standard commercial buildings. 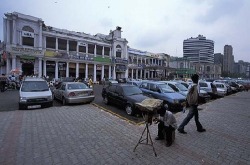 In response to concern about the changing face of new Delhi, the urban arts commission was set up by the parliament in 1973 and given powers of approval over structures of "public importance". Its members proved either unwilling or unable, however, to halt the spread of high-rise building.

The 1962 plan had included a system for controlling the height of buildings by creating a floor-area ratio in which height was related to plot size, with ratios varying according to the zone of the city. The most generous height allowances were projected for the business district adjacent to Connaught place.

Included in various proposals for the district was a scheme produced by Raj Rewal and Kuldip singh in 1968 for the controlled redevelopment of barakhamba and Curzon roads.

They suggested that tower blocks be set back from the street alignment, to be partially screened by a raised pedestrian plaza and an irregular line of relatively low buildings. A similar proposal was made in 1969 for Janpath(below,left) another broad artery leading into Connaught place. This street was to continue as a shopping area, with low-rise buildings bordering the street and tall buildings set within the blocks. In practice, however, the district had no unified plan, becoming instead the focus of spontaneous high-rise development.

The old unity of style, moreover, was supplanted by flamboyantly competing forms. Contributing to the dramatic new profile of the commercial center was the life Insurance corporation of India building by Charles Correa, together with the state trading corporation (below,right) and the new town hall by Raj Rewal and Kuldip Singh. The large column free framework in vertical shafts creates large spans and allows for a variety of forms to be hung between them. 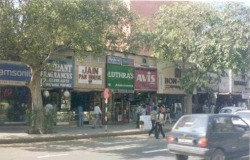 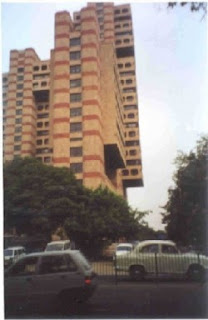