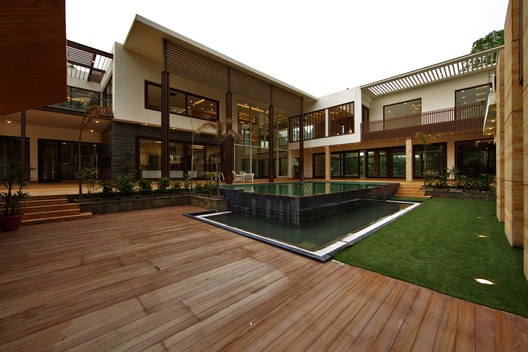 Kapil Aggarwal of Spaces Architects creates a home in New Delhi for the Sobtis family, comprising rooms for three generations where they live harmoniously together and nurture each other.
There are any number of situations that impact the linkage between a designer and client; and it is safe to assume that the quality of this linkage has an impact on the final outcome of the project. Sometimes it happens that the homeowners are not too sure about the kind of house they would like. But while they may not have crystallised their design vocabulary, what they do have is a broad agreement with the kind of look created by a specific architect/designer and they are happy to put their faith in her/him. Something like this seems to have happened between the Sobtis and Kapil Aggarwal of Spaces Architects.
The Sobtis had a shell of a home on two floors of a builder flat in New Delhi and these had to be connected internally to create a home for three generations. Kapil Aggarwal, who has done plenty of such modeling of given spaces, set about the job by pitching the entire layout around the fact that the family is a lot into meditation. The lady is a medical practitioner while the gentleman is a businessman. Their two children, a son and a daughter, and their parents have their age specific requirements and these had to be respected, says Kapil. One of the advantages that the site had was that it was open on three sides. Capitalising on the abundance of natural light, Kapil’s layout ensured that ample light would flow into the interiors. 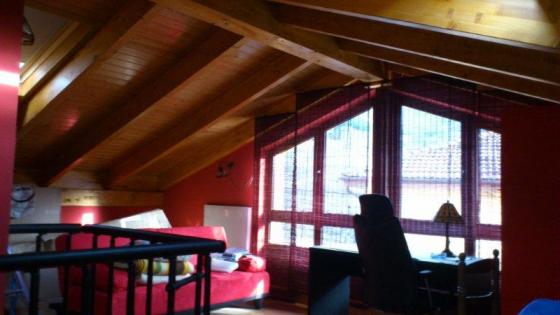 The formal living room has a glass wall, which feeds this light into the rest of the house. Supplementing it, is the large glass window of the dining area. The ‘heart’ of the house consists of a special platform created for meditation. Demarcated by solid timber pillars, the platform becomes a distinctive area, and a water body close to it heightens the feeling of peace. The primary function of the public areas is to keep the three generations connected with adequate and appropriate facilities. Hence a lounge close to the dining area allows everyone to communicate, while obviating the need for them to be eating together at the same time to communicate. One could just be in the lounge relaxing while the children are dining and so on. 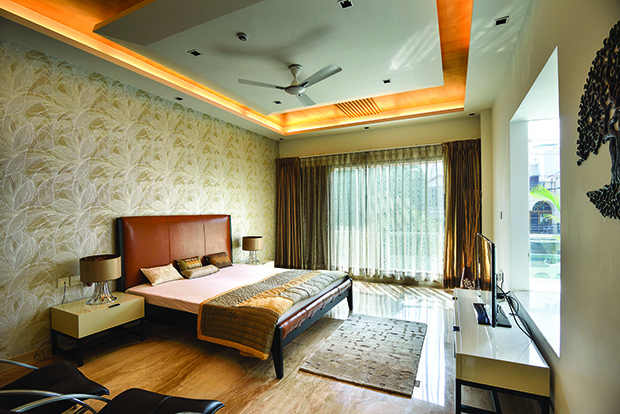 The kitchen has been kept open on three sides while the cooking counter remains at a discreet distance from the dining table. From the living room end its smart SS chimneys and white fixtures with SS trimmings look extremely stylish. There is a splash of colour in warm and cool tones on the back splash, but it is the graphic floor tiles in shades of grey that tie it all up. On the lower level are the living, dining, meditation areas beside the kitchen, the parents’ and the son’s bedroom. A timber and glass staircase connects the two levels and the double-height volume gets a touch of lightness through a set of interesting lights, which also form a part of the formal living area. The landing of the stairs is embellished with another set of wall fixtures, which in some ways echo the design theme of the lights from the ceiling. Clear glass with minimal fittings makes for a very clean look, keeping the general flow of light uninterrupted. 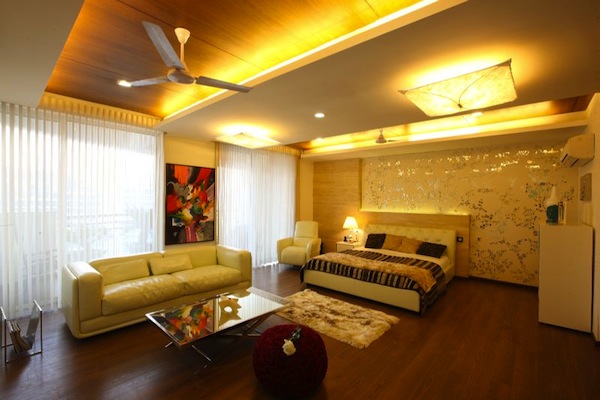 All along the stairs and also at the mezzanine, it is but strips of timber that break the line of vision. All the rooms have been treated with a subtle colour palette on the walls keeping the décor light. A play with textures on stone and 3D MDF panels on the headboard walls keep the rooms from becoming staid and dull. Naturally appearing grains and veins in materials, be they wood or stone are the mainstay of design here, punctuated by clear glass and the house is painted lavishly with natural light. The upper floor has a lobby, which connects the three bedrooms.
The master bedroom and the daughter’s room are located in the front and the guest bedroom at the rear. A bright lounge is the meeting point here. With double-height fixed glass windows going right up to the ceiling, there isn’t a dark corner here. The well of the house is luxuriously endowed and smartly embellished with a judicious mix of art and artefacts. Each room has a little touch that distinguishes it from the others. The daughter’s bedroom has a little feminine touch in the form of flower stencils and colours, the master bedroom has a sober 3D headboard while the son’s room has a masculine flair. 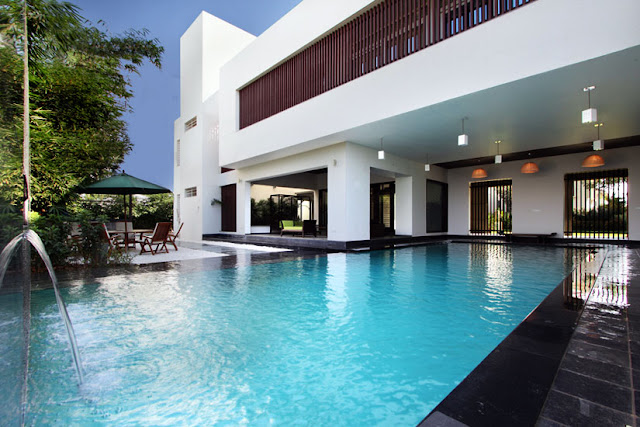 The double-height connecting the two floors is interestingly lit with multiple coloured lights hung from the ceiling, creating a composition and also complementing the colourful painting. The daughter’s room has abstract wall paneling at the rear with an interesting laser-cut panel on the ceiling. The master bedroom has a 3D panelled wall at the rear, the space enhanced by the natural light filtering through the front glazing, highlighting the grey and blue tones used in the room. Thus without getting boring or predictable yet with a control on colour tones, Kapil and his team have infused life and character into this 4,500 sq ft city home.
6:32 AM
Unknown
contemporary bungalow rendering, home 3d interior design, home exterior render, house 3d exterior design